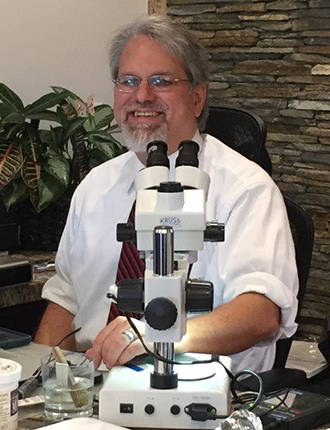 
Geoffrey A. Nelson reentered the jewelry industry in 1991 after receiving the Graduate Jeweler Gemologist degree from the Gemological Institute of America. He began appraising for a small independent jewelry store and discovered many inconsistencies in appraisal practice as well as gemological knowledge. He decided to improve his gemological skills and learn more about diamond analysis and the market by applying his previous education in the computer field at The European Gemological Laboratory in Los Angeles. Under the direction of Tom Tashey, former Director of The Gemological Institute of America’s Gem Trade Laboratory, he learned to quality grade diamonds in between managing the design of the system software to handle the business. After accomplishing his goals there, he moved on to become the Assistant Director of the American International Gemologist Laboratory completing his course requirements to become an Accredited Member of the International Society of Appraisers. Geoff is the only appraiser in the gem and jewelry department of the association with laboratory training as a gemologist. He is also a Senior Member of the National Association of Jewelry Appraisers.

As an appraiser, he verified diamond analysis reports as a consultant for the Federal Bureau of Investigation to convict members of a major diamond heist. His laboratory experience enabled him to positively identify the stolen diamonds. While working with the United States Secret Service, they were able to uncover a scheme to defraud an insurance company of several thousands of dollars. His testimony as an expert witness in the Los Angeles County Court System is sought after by many prominent attorneys. As president of the Southern California Chapter of the American Gem Society, they were elected “1999 Guild of the Year.” Geoff has many other interests besides gems and jewelry, such as a membership with the Rotary Club. He is also an accomplished artist, having apprenticed with the master jeweler, Bob Hazeltine, former Department Director for the Gemological Institute of America’s Jewelry Manufacturing Arts, in his private studio. As well as studying the fine art of swordsmithing specializing in pattern welded Damascus with the master Jim Hrisoulas. In his spare time, he teaches jewelry appraising to new gemologists at Santiago Canyon College.